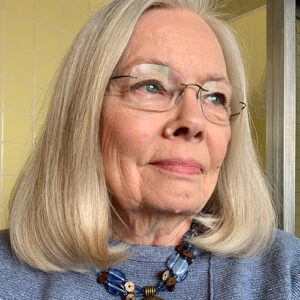 A military brat, Cathie Sandstrom has lived in five countries and ten states. Twice a Pushcart nominee in 2017, her work is on the website of the Academy of American Poets at poets.org, and has appeared in The Southern Review, Ploughshares, Ekphrasis, and Lyric, among others. Anthologies include Wide Awake: Poets of Los Angeles and Beyond. Her poem “You, Again” is in the artists’ book collection at the Getty Museum in Los Angeles, and she has a poem forthcoming in Poetry in Motion, sponsored by the Poetry Society of America. She serves on the Advisory Board of the National Veterans Foundation, for whom she blogged on veterans issues for Huffington Post; and on the editorial board of The Arbor, the magazine of the Knights of the Vine International Wine Brotherhood. Cathie lives in Sierra Madre, against the San Gabriels, where she still expects to hear from the Pentagon any day.