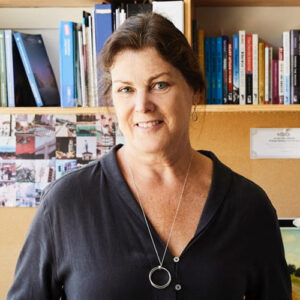 Colleen Dunn Bates is the former publisher of Prospect Park Books, which she built to be one of L.A.’s leading trade publishers before selling it to Turner Publishing in 2021. Prospect Park’s books have won awards, been on bestseller lists, and won acclaim from national and international media. A sixth-generation Angeleno who earned a journalism degree from USC, Colleen was a writer and editor before becoming a publisher; her credits include everything from co-authoring the book Storybook Travels, to writing hundreds of articles for such magazines as Food & Wine, Westways, L.A. Style, Cooking Light, and Bon Appetit, to creating, co-authoring, and editing such books as Read Me, Los Angeles, Hometown Pasadena, and EAT: Los Angeles. She is currently figuring out her next stage of life from her home in Altadena.