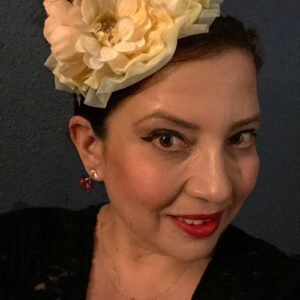 Juanita E. Mantz (“JEM”) is a writer, lawyer, performer and podcaster. Her YA memoir, Tales of an Inland Empire Girl, was published by Los Nietos Press in 2022. Her hybrid chapbook, Portrait of a Deputy Public Defender, or how I became a punk rock lawyer, was released by Bamboo Dart Press in 2021. JEM has been published in numerous publications including The Acentos Review, Aljazeera, Bitch Media, Inlandia and The Riverside Press Enterprise, amongst others. She is a proud Macondista and VONA alum and serves as VP on the Inlandia Institute Board. She has presented at AWP, Beyond Baroque, UCR Writers’ Week, and the UCR Punk Conference. JEM produced the ASA 2020 Freedom Course on Combatting Mass Incarceration. JEM is in the low residency MFA program at UNO and works as a deputy public defender in Riverside. On her Life of JEM live video podcast, she interviews writers and artists.