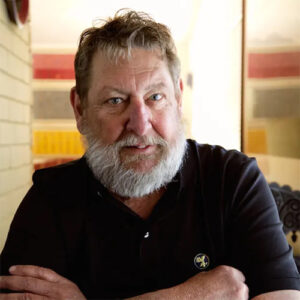 Lou Mathews lives in Los Angeles and is a fourth generation Angeleno. Married at 19, he worked his way through U.C. Santa Cruz as a gas station attendant and mechanic and continued to work as a mechanic until he was 39. His first novel, L.A. Breakdown, about illegal street racing, was picked by the Los Angeles Times as a Best Book of 1999. He has received a National Endowment for the Arts Fellowship in Fiction, a California Arts Council Fiction Fellowship, a Pushcart Prize and a Katherine Anne Porter Prize. His short stories have been published in Short Story, ZYZZYVA, New England Review Witness, seven issues of Black Clock, nine fiction anthologies and two textbook series. His new novel, Shaky Town, was published in September 2021. Shaky Town was long-listed for the 2022 Tournament of Books and was reviewed favorably by The Los Angeles Review of Books, The Millions and The Los Angeles Times.